MOORE Energy AS (MOORE) is pleased to announce that the planned seismic survey over the Seebach exploration license was completed on time, on budget and without any LTI. The survey was conducted by CGG in the period from 7 August 2017 to 9 September 2017.

The high density seismic survey comprises 12 lines and 7 intermediate lines covering 127 km with the objective to improve the imaging of prospects in the Triassic and identify possible drilling targets.

The seismic data is currently being processed by the French geophysical contractor CDP and interpretation is expected to be completed by end December 2017.

The license comprises proven oil bearing Tertiary sands and potential oil rich Triassic horizons which have produced hydrocarbons in tests from wells within the neighbouring "Pechelbronn" concession. The Triassic horizons are the main exploration targets on the German side of the Rhine Graben following the recent  discovery of the 60 mmbbl "Speyer" oil field operated by Engie located about 40 km NE of Seebach.

Stephane Touche, President of Bluebach, said: “We are extremely pleased with the successful completion of this survey, the overall management of the project and the quality of the data. It is the first time that a seismic survey aims at imaging the Triassic horizons in Alsace and we look forward to the results from the newly acquired data”.

He added: “Our goal is to evaluate and de-risk our existing prospects and define potential drilling targets”.

MOORE is a private Norwegian independent E&P company with focus on conventional resources onshore France/Europe and Texas/US. The company has secured a unique position in Alsace with three exploration licenses covering an area of 1,000 km2 and is preparing acquisitions of oil and gas leases in the Fort Worth Basin NW of Dallas, Texas.

Activity in France and US 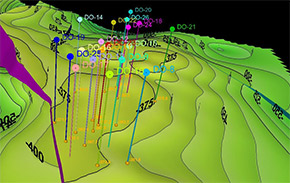