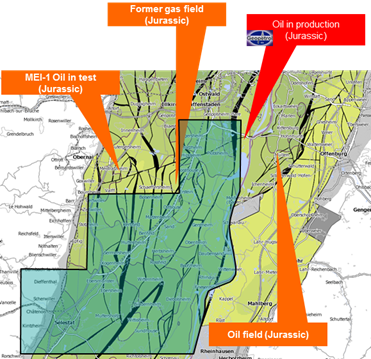 The license was awarded in September 2015 and is valid for five years. It covers 506 km2 and is located in the “Erstein high” which has been home to oil and gas discoveries in the Grande Oolithe – a Dogger limestone formation.

The license benefits from 826 km 2D seismic publicly available from the mid 1970s to 1987 and from 18 exploration wells drilled within and next to the licence in the period 1955-1989 by PREPA, ELF, Shell and Total.

The Eschau concession juxtaposed to the license produces oil from the Grande Oolithe at a depth of 870 m. The field which holds approximately 1 mmbbl of oil was discovered in 1956 and has produced until recently.

The Meistratzheim oil discovery in the Grande Oolithe is also located in the «Erstein high» in the vicinity of the license, as well as the Schaeffersheim gas field which has produced 42 mm m3 (or 1,500 mm ft3) from the Grande Oolithe between 1976 and 1986.

Oil has also been discovered in the Tertiary sandstones in the neighbouring well Eschau-1 at a depth of 350 m and oil shows were observed in the well Kraft-1.

On the German side, the Offenburg oil field was discovered in 1982 in the Grande Oolithe formation and holds 5-6 mmbbl.

Finally, oil shows in the Triassic horizons in the wells Kraft-1 and Eschau-1 confirms the significant potential of the Herbsheim license.

The license is located 100 km from the Karlsruhe refinery.