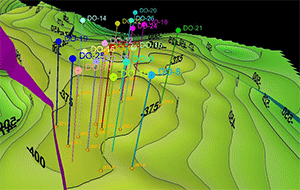 MOORE indirectly holds a net 30% working interest in the Soufflenheim exploration license through its 55% owned Millennium Geo-Venture (holds a 55% working interest) and operates the license located in northern Alsace next to the Seebach license and Pechelbronn concession which has produced oil in excess of 22 mmbbl.

The license covers 200 km2 and benefits from an extensive publicly available seismic grid (almost 300 km 2D) and from 35 exploration wells drilled from the mid 1940s to 1962 by PREPA, primarily into the Tertiary formations. The license holds three shallow oil fields in the Tertiary sandstones (Soufflenheim, Schirrhein and Kaltenhouse), out of which two produced 550,000 bbl of oil between 1954 and 1968 prior to being abandoned for economic reasons.

The Triassic horizons from which oil was discovered and produced in the neighbouring Pechelbronn concession at the end of the 1940s, where oil was encountered in the vicinity of the Rittershoffen-1 and Rittershoffen-2 wells in the Seebach license to the north and which are home for the Speyer field in Germany, represents an interesting potential within the Soufflenheim license.

The SFH-1 data gathering well drilled within the Soufflenheim field during 2014 discovered oil, but the water cut experienced during the subsequent production test remained too high to envisage commercial production under the present economic conditions. Further geo-modelling work is needed to better map possible un-swept areas in the field.

The license holds further potential in the Tertiary sandstones with the abandoned Schirrhein oil field, the undeveloped Kaltenhouse oil field as well as five un-drilled closed structures visible on the seismic interpretation.

The Jurassic also holds an interesting potential within the license as four exploration wells have produced oil and gas in test during the early 1950s from different Jurassic horizons. Oil was also produced in test from the Dogger (Grande Oolithe) in the vicinity of the license.

The license is located 35 km from the Karlsruhe refinery.

The second validity period of the license expired in October 2017 and an application for a 5 years third period has been filed (the license is automatically renewed for 3 years as the commitments for the second period have been fulfilled).